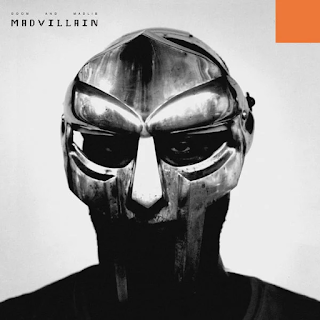 Remarked as one of the best underground hip-hop albums of all time, Madvillainy is the first and only collaboration album between legendary rapper MF DOOM and legendary producer Madlib. The album was recorded between 2002 and 2004 with Madlib apparently relying on 3 pieces of equipment to make all of the beats, a Boss Digital Sampler, a turntable, and a tape deck. For those who aren't familiar with both of these artists, Madlib is a legendary rap/hip-hop producer out of California who started working with the Stones Throw label in 1999. His usual style includes a lot of old vocal samples mixed with vintage live instrumentation to make something magical. DOOM, on the other hand, is a little bit more mysterious. Born Daniel Dumile, he started rapping under the MF DOOM name in 1997 when he would perform with a woman's stocking over his head. In 1999, he put out his first album under the DOOM name entitled Operation Doomsday which had some solid moments but it's a very hit or miss album. DOOM and Madlib first met in 2001 when DOOM got some instrumentals from Madlib and fell in love with them. The two began working on the album in 2002, where allegedly, all they did was, record music, drink beer, eat Thai food, smoke weed, and take psychedelic mushrooms.
In these times, leaking music was a huge make or break deal, so when the album leaked 14 months before it was set to be officially released, the two abandoned the project completely. They got fed up with people appreciating the album at their shows so they forgot about it. Madlib went on to release a collaboration album with J Dilla and DOOM, well, does anyone ever know what he's doing?
After two years of working on their own, the duo reconvened and dropped this album on my 2nd birthday, March 23, 2004 and was met with instant praise. The album has also made its way onto multiple "Best Albums of All Time" lists. At 22 songs but on 46 minutes of runtime, this album is pretty slick. None of the songs have hooks or choruses, rather, it's DOOM just spitting for 1.5-2 minutes backed with some sick sampling and beat making. For those of y'all who have listened to this album and know DOOM's music in general, you won't be surprised by the next thing I say, but the number of insane bars and amazing one-liners on this album is crazy as hell. Every song on this album has at least 5-6 great lines in it and it's almost hard to keep up with all of them. Also, his flows on this album are top-notch. He flows so well on top of all of these beats and for someone who uses the same flow on every song, it manages to never get old.
The first song on this album is Accordion with DOOM wasting no time dropping great lines, giving a god-tier bar just 4 lines into the album saying:
Dick Dastardly and Muttley with sick laughter
A gun fight and they come to cut the mixmaster
Just look up this line on Genius, it's crazy. Also, there's a really clever one-liner with DOOM saying, "It's like they know what's 'bout to happen / Just keep ya eye out, like 'Aye, aye captain.'" Right after this line he starts going off lyrically giving us one-liners like "giving y'all nothing but the lick like two broads / got more lyrics than the church got 'ooh lords!'" and a line that never fails to make me laugh where he says, "don't touch the mic like it's AIDS on it." I would like to remind you guys again that this is only the first full song on the album we have a long way to go in terms of bars and production. The song Meat Grinder has a really cool two-part beat, the first half has this really interesting Frank Zappa flip with some great drums. The second half is the polar opposite with some super grimey bass and maracas leading the song. Once again, DOOM is flexing his pen game with my favorite bar in the song being:

Still back in the game like Jack LaLanne
Think you know the name, don't rack your brain
Raid is an upbeat, almost jazz-rap song with one of the few legitimate features on this album as most of the features are either DOOM or Madlib alter-egos. DOOM doesn't have too many standout bars or one-liners on this one but he comes through with a great threat towards people wanting to bite his style saying:
Don't let me find out who tried to bite
They better off goin' to fly a kite in a firefight
During tornado time with no coat than I caught ya
America's Most Blunted is an ode to weed with both DOOM and Quasimoto's verses dealing with smoking weed or just being high in general. The production on this song is absolutely insane and both verses are fantastic. The song Sickfit is an instrumental bit that deserves a verse spat on top but as legend has it, DOOM thought the song was too good and didn't need a verse so they left it as is.
The song Curls is one of my favorite songs on this project with DOOM's bar going harder than ever, opening the song by rapping:
Villain get the money like curls
They just tryin' to get a nut like squirrels in his mad world
Land of milk and honey with the swirls
Where reckless naked girls get necklaces of pearls
The rhymes on Money Folder are even crazier with DOOM saying at one point that he owns his own microphone and he brings it everywhere he goes "so he can bring it live to you in stere-ere-o." He also manages to take a shot at himself saying, "Poor guys, what a sight for old, sore four-eyes / Now hook me with two apple pies and a small fries." Operation Lifesaver is a hilarious 90-second song about an interaction DOOM had with a girl who had bad breath. It's probably the least serious song on here but he still manages to pull off some memorable lines like DOOM's first on the song saying "Wow, it caught me off guard, went to breathe out and then she made me cough hard" or a line closer towards the end of the song, "Fellas don't fess, some of 'em just need to eat the whole thing of Crest." It's hilarious. Figaro has a really sweet guitar sample and some tambourine heavy drumming. This song is pretty much one solid verse and I don't even think DOOM takes a single breath throughout the whole thing. It's just so lyrically dense and his rhymes on this song are insane, starting off by rapping:

The rest is empty with no brain, but the clever nerd
The best emcee with no chain ya ever heard
He just goes off for 2 and a half minutes straight and the rhymes just keep on coming and keep blowing my mind both reading them and hearing them. The one that gets me every time is when he goes:
A shot of Jack got her back it's not an act stack
Forgot about the cackalack, holla back; clack-clack, blocka
Villainy, feel him in ya heart chakra, chart-toppa
Start-sh*t stoppa, be a smart shoppa
The song Fancy Clown is another hilarious song sung by another DOOM personality Viktor Vaughn. The song shows Viktor angrily calling his girlfriend to confront her after he found out she was cheating on him...with DOOM. There's a really sick ZZ Hill sample led by a piano that's really easy to get lost in. The lyrics are bitter as hell with Vaughn holding nothing back in the verses. The first verse shows Vaughn just going right in while the second verse shows him getting a little petty and trying to stab back at her rapping about, erm, fun times he had with his ex's friend, a hotel maid, and even his ex's mom(?), this is tough.
The last three songs on the album, All Caps, Great Day, and Rhinestone Cowboy end the album spectacularly. All Caps might have my favorite beat on this entire album sampling a cartoon intro and pausing whenever DOOM hits a punchline. And if you're annoyed by me capitalizing DOOM everytime I type it, blame the line, "Just remember ALL CAPS when you spell the man name." Great Day shows his wordplay in full swing again, at one point breaking up his rhyme scheme to clear his throat to throw the listener off rapping:

Spit so many verses sometimes my jaw twitches
One thing this party could use is more... ahem
Booze, put yourself in your own shoes
The joke here being you expect him to say "b*tches" but he pauses, switches up his flow, and changes his rhyme scheme. There's also a hilarious line about how his flows are drowned in "Lawry's seasoning," which makes me laugh every time. Then last but not least is Rhinestone Cowboy which shows DOOM going off one more time before the album closes and it's fantastic. There are too many lines in the first verse to include but two standouts are DOOM calling himself the "phantom of the Grand Ol Opry" and there's another line that always blows my mind with DOOM saying, "Got more soul than a sock with a hole." Just an absolute god tier bar.
If you're a fan of rap music at all, it doesn't matter what style, I highly suggest you give this album a listen. DOOM has slowly become a top 5 rapper of all time for me just because of how well he flows, how lyrical he gets, and the beats he decides to hop on top of are always fantastic. He definitely has paved his own way through this scene and while he might be in hibernation for the rest of our lifetime, nothing would excite me more than getting another MF DOOM album soon. Until then, this album in the middle of his hottest hot streak is still the crown jewel and definitely a classic album.
Posted by Andrew Watters at 12:00 PM