Right now I should probably be in Zilker Park. I'd probably be seeing the beginning of a set at either the American Express or the Honda Stage. Maybe I'd be finishing up a Korean Chicken Sandwich from Chi'lantro, or maybe I'd have meeting an artist at the Waterloo Tent. Of course, we can't be doing that this year and while I accepted it early on, it still stings. There's no greater joy than being able to party with 75,000 strangers every day for 3 days straight. Enjoying the artists I love, exploring new sounds, and most of all, meeting tons of new people. This year was supposed to be year 3 for me. As speculation ensued, I was excited to hear that maybe this was the year I would get to see Rage Against the Machine or Kendrick Lamar for the first time but now, I'm just excited for the virtual fest this weekend.

In the past two years, the festival has helped me find my new favorite artists and let me see artists who I don't think I would normally. So to honor this ACL weekend, I figured this would be the best way to celebrate by counting down all 13 ACL sets I've seen. (I know that seems low but keep in mind, I only went to the festival Saturday of last year)

I don't even think I have to explain this one. I walked into the fest planning on going straight to the Miller Lite stage and was shocked to hear no music even though I showed 20 minutes into when her set was supposed to start. At least I got a better spot for a set I'll talk about in a little bit

This is the only still the only festival set I had to leave early because of just how boring it was. Now don't get me wrong, I like 21 Savage's music. I Am > I Was was one of my favorite trap albums of the last decade and I still keep songs like Bank Account and Don't Come Out The House in constant rotation, but the man is just not a good live performer. Giving little to no effort while singing, pacing back and forth atop of a giant LED mountain. Maybe I would've have had a better time if I was maybe 10-15 rows back from the stage, but good performers will keep you entertained no matter how far back you are.
11. Highly Suspect 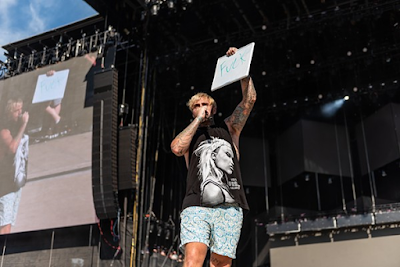 Donald Glover is a mysterious man, so while this might not technically be the last show he ever plays under the Childish Gambino name, he made it special considering it might be. He had one of the grandest entrances I've ever seen in my two years of going to the fest, popping up in front of the soundboard and rising up on a platform studded with disco balls. Glover spent as much time in the crowd as he did on stage, signing an Awaken, My Love vinyl, taking selfies with a few lucky fans, and talking to us about his band. On stage, he was an unstoppable force. He has an amazing voice, he's an incredible dancer, and the live band behind him was insanely good, adding another level to the songs I already knew I loved. His stage show was also great with lots of lasers, fireworks, and video screens making it feel like I was watching a concert film directed by Glover himself. The show was split into three sections, the first third being the bangers, songs like The Worst Guys and Worldstar, the former of which featured touring guitarist Ray Suen absolutely killing the guitar solo, the trippy songs, which featured more moodiness and performances of songs like Have Some Love which featured a really awesome dance break right in the middle, Riot! which had an absolute explosion of sound after a tuned down intro with just Glover and a guitar strumming a few chords, and Terrified which dead serious brought me to tears. The last section, and possibly the best, was all of the hits starting with This is America right before the encore break then leading into Sober, 3005, and Sweatpants which sent the crowd into an absolute frenzy before ending his set with Redbone which was the cherry on top for the best show I saw last year.
2. Metallica
I was sort of skeptical when I saw Metallica headlining ACL Fest. Don't get me wrong, I love the band and they're the reason I got into harder rock and metal music, but for them to play ACL? The heaviest headliner before them was Foo Fighters and they aren't exactly the heaviest rock band out there. Nevertheless, I took the opportunity, got to the AmEx stage at 1:30 that afternoon, and after a tumultuous day of music, my day of waiting paid off. This late into their career, the band is still in excellent form, still bringing a ton of energy on stage and still dishing out those fast, chugging riffs that they made their name on. James Hetfield is still an amazing frontman while he has obviously calmed down over the years. After the one-two punch of Hardwired and "Atlas, Rise!" to kick off the show, Hetfield stood in front of a mic and said, "I SMELL BARBEQUEEEEE!!!" Over the next two hours, the band delivered hit after hit and the crowd ate it up. For someone seeing the band for the first time, the setlist was almost perfect. And dare I say, most of the songs sounded better live, songs like Welcome Home (Sanitarium) and even One, the latter of which might have been the highlight of the night for me. The band's last two songs produced the biggest sing-a-longs of the night with Nothing Else Matters and Enter Sandman closing out Saturday. Enter Sandman was complimented with two separate firework blasts and one last "AYE AYE AYE" chant before the band threw out guitar picks and drumsticks then thanked all of us before heading home. While I knew to expect something good, I didn't expect the show to be quite as good as this was. I still listen to the live recording of this show quite often and it takes me right back to standing there in Zilker.
1. Paul McCartney 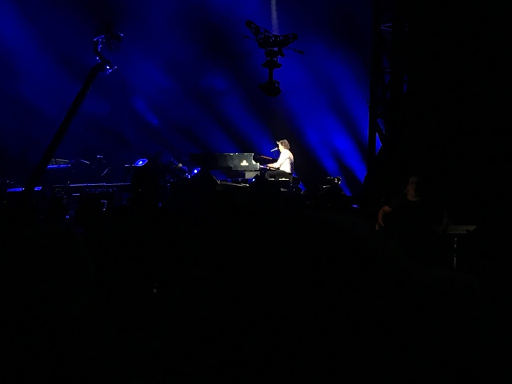 I think the best way to describe just how great this show was is by saying this isn't just the best ACL set I've ever seen, it's the best concert I've ever been to in my life in general. I know this might sound terrible of me to say but I wasn't incredibly hyped up to see Paul. Sure I knew a couple of Beatles song and knew Maybe, I'm Amazed but walking over to the AmEx stage, I decided that I was only gonna go just so I could say I'd seen him since it was such a big booking for the fest. As showtime got closer and closer, the anticipation grew more and more. His show started with what might be one of the softest intros I've seen from a headliner at ACL in my time going. A little video played, then the house lights turned on, and out came Paul and his band. He opened up with Hard Day's Night which, to this day I still don't remember hearing the opening chord because of how loud and excited everyone around me was. After that first song alone, I knew the rest of the night was gonna be special. The next 2 hours and 15 minutes were an amazing trip through Paul's entire career and his backing band was on fire for all of it. Something I remember vividly was his performance of Letting Go which has this huge horn section in the middle of it. I heard the horns but I couldn't figure out where they were coming from but a camera showed them standing along the barricade in the middle of the pit.
While I did enjoy the whole show, there was nothing I enjoyed more than the last half of the show where the setlist just became hit after hit after hit. Let it Be was one of the songs I knew beforehand and singing along to it with 60 thousand strangers was honestly beautiful. After that was Live and Let Die which was an insane flurry of pyro, fireworks, lasers, just absolute chaos on stage but beautiful chaos. And then, Hey Jude, which gave me chills just thinking about it. Leading up to the festival I had been waiting for that part, the NA NA NA NANANANAAAA and it was incredible. You could tell I wasn't the only one and to be quite honest, I wouldn't have any problem if it kept going on for two more hours. It's such a beautiful thing to think about moments like that. Very rarely can you get such a large group of people to just drop everything they're doing and just sing along. The performance of Helter Skelter was everything I expected it to be. The guitars were loud, Paul was screaming his head off, and the drums were just booming away. His show ended with the trilogy of Golden Slumbers/Carry That Weight/The End and after a burst of confetti, McCartney walked off stage. This is probably a bold statement but if you ever get the chance at all to see Paul McCartney live, take it. He's still as energetic as he was at 30 as his is now and he still sounds amazing. Even if you don't like The Beatles or Paul's solo work, give his show a chance, you will not regret it.
Posted by Andrew Watters at 12:41 PM