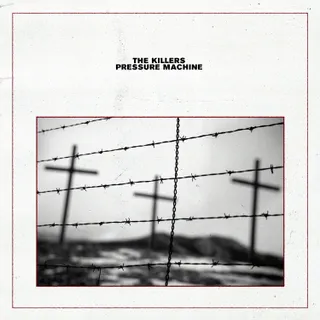 Remember last year when I came on here and reviewed a new Killers album? It was called Imploding the Mirage and at the time, I thought it was the band at their best since their heyday in the mid-2000s. I gave a lot of high praise to frontman Brandon Flowers' performances and writing, I loved a lot of synth passages and drummer Ronnie Vannucci Jr's performances as well. But most importantly, the album was tight, consistent, and strong. And even post review, I still gave that album a lot of praise. The opening song My Own Soul's Warning landed in the #3 spot for my top 30 songs of the year, and the album landed at #10 on my Best Albums list. Once this album cycle was sort of over though, I didn't expect anything from The Killers until 2023 or so at the very earliest. I figured they would tour, do the festival circuit, maybe tour again, then try to start recording something. However, I got taken by surprise in June when Vannucci said in an interview that they already had a new album finished and they were planning on releasing it this month. It wasn't a 100% good surprise either.

In fact, I was almost kind of concerned? For starters, Ronnie said in the same interview that they had a huge stockpile of material for this album and that it was going to be "very different" which is usually a cover for an album being horrible. Also, just about anyone would be concerned if one of their favorite bands decided to drop another full-length album just under a year after their last one. So, with low expectations, I went into this new album just hoping for it to be consistent, maybe a banger or two that could slip into the setlist, and maybe a song that I could fight people over being underrated in the years to come but what I got was not that...and I mean that in the best way possible.

The album is 11 songs long, the standard version is a little over 51 minutes in length and Ronnie did deliver on that promise, this is a very different album from Imploding the Mirage. This album still does have the staples of The Killers music, bright synths, great guitar leads, catchy choruses at times, but where this album strays from their usual material is the fact that this is a concept album and Brandon's writing is the most focused it's ever been and dare I say I think that this is the best his writing has ever been. This album revolves around the town of Nephi, Utah where Brandon lived for part of his life while growing up, and through the various interludes between songs, there's a whole lot to learn about this city...both good and bad. On the good side, this town has all those small-town cliches. Everybody knows everybody, everybody knows who's doing what with who and where common tropes you'll hear about any small town. There are also people who talk about their love of hunting, their blue-collar work. Again, nothing too uncommon for an album about a small town. Then there are the not-so-happy aspects of these interludes where the citizens talk about being hopeless, how the town has been run through and severely hurt by opioids. There's also an interlude before the song Quiet Town where the speaker talks about how every 2 or 3 years someone gets hit by a train in the town and how a lot of people see the train as a way of escaping life in Nephi.

Quiet Town has to be one of my favorite songs on this album, while I'm on the topic of it. I love the blend of acoustic and electric guitars on the song along with the nice synth lead and the wailing harmonica that shows up during the chorus. The lyrics on this song too are really good with Brandon opening the song talking about how a couple in the town got hit by a train and it shocked everyone because they were getting ready to graduate and they were planning on getting married and having kids. He ends the first verse by saying "Things like that ain't supposed to happen in this quiet town." He also sings in the chorus about how everyone in the town is super tight to the point where no one locks their doors at night.

But the themes and lyrical focuses on the album spread farther than that with some songs on here about religious trauma, homophobia, there's even a song on here, Desperate Things, where Brandon portrays a cop who pulls over a woman who's speeding, finds out that she's a victim of domestic abuse, and they end up falling in love with each other and being unfaithful to their spouses. In even more of a twist, the song ends with Brandon killing the girl's husband. It's a wild lyrical moment. I think another one of Brandon's strongest lyrical moments is on the song In Another Life, which, instrumentally I think leans a little too close to a War on Drugs song but again, Brandon's lyrics pick up that slack big time, opening the song by singing:

Is this the life you chose yourselfOr just how it ended up?Is that the yard you pictured whenYou closed your eyes and dreamedOf children in the grass running through the sprinklers?

Now while there are more slower and subdued songs on this album than usual, don't worry, there's still a handful of bangers on here. The opening song West Hills, is energetic, dramatic, and I honestly think it might be their best opening song on any of their albums to date, I'm not sure, Sam's Town slaps. The song starts off with some somber piano chords and Ronnie pounding away with some speedy 16th notes behind the drums. If he was playing a more simple pattern I'd probably compare this to a Nick Cave song but since Ronnie decided to drink 3 Bangs before they hit record, I can't make that comparison. Brandon's lyrics on the song again flex his storytelling muscle, singing about how he was born in Zion as God's own son even though he never cared for religion. He continues on singing about a relationship, saying that this girl he's dating or married to already had two children with "one still on the vine" and even though he wasn't that third child's biological dad, he still "loved him like he was mine." The song reaches its climax in the third verse when Brandon sings:

In The Car Outside might be my favorite song on this album because it's the best representation of this album to someone who might be curious what it's like or just needs a song to ease themselves into the album. Instrumentally, it's classic Killers through and through with a nice mix of New Wave and Heartland Rock. It's upbeat, it's catchy, to put it simply, this song is a banger. But lyrically, this song is a lot darker with Brandon singing a very one-sided song about a marriage that isn't working out, opening the song singing about how he's seeking refuge in his car and doesn't want to go back into the house because he knows his wife will be pissed at him. I also love his lines on the second verse where he sings about how he put stickers on the house windows that make them look like stained glass but when his wife "turns it's like the shadow of the cross don't cast." The line he ends the verse with too, "It's like waiting for a train to pass and I don't know when it'll pass" is fantastic too.

Runaway Horses is a song I was looking forward to hearing considering that none other than Phoebe Bridgers was featured on the song and after spending some time with it, I think it's great. Even if Phoebe doesn't get her own verse, her and Brandon still sound fantastic together. It's the perfect song for Phoebe to be on too with an acoustic guitar, some grand and somber strings, and piano chords leading the song. It's Phoebe's bread and butter. But Brandon really shines on an acoustic song two songs earlier with the song Terrible Thing which is probably one of the starkest songs on the album with Brandon singing from the perspective of a kid in this town who's confused and afraid to express that he's gay. He sings about how everybody in the town takes up a cross and praises God as faithfully as they can "but the cards that I was dealt will get you thrown out of the game." He sings afterward:

Hey, mama, can't you see your boy is wrapped up in the strangle silkOf this cobweb town where culture is king?

He also sings in the third verse confused about how people in the town can fight bulls to get seriously injured or even killed, as a bullfighter in this song does, and be worthy of God but liking someone the same gender as you is cause to be chastised. And if we're talking about religion-based songs, I have to mention Cody even though this one is more based on Cody than religion as a whole. The song instrumentally sounds really raw, Ronnie's drums on the song sound like they have the air sucked out of them, either that or they just recorded them with one microphone. I also love the horns that pop up in the second half of the song and I can't not mention Keuning's guitar solo on this song which is fuzzy, distorted, loud, and it understands its assignment perfectly. Brandon sings about our protagonist in the song, Cody, who is a kid who has nothing better to do in this town than cause trouble. Brandon says that Cody "does his pulling with his eyes" and "does his talking with his fists." He also sings that Cody:

And statements like this seem to revolve around the whole album. In Nephi, you either love God, love worshipping him, and do the best you can to look good in his eyes, or you resent him, and don't understand what's so great about him because either A.) you don't believe in him and his power, or B.) the people in this town are just giving a false sense of who he is which makes it hard for someone like the character in Terrible Thing to truly see his light. Sorry if this turned into some pro-religion rant. I do consider myself to be a Christian and someone who loves God and believes he's there, but it's easy to see in a town like this that people can be toxic about their love of God and use it to excuse homophobia or other transgressions of that nature.

I honestly don't know how I want to wrap this one up because I think this album is incredible. I guess with extended time at home last year due to quarantine, Brandon found the key to consistency again either in between a cushion or in a dusty box in the attic next to his eyeliner. Either way, this album is probably the best thing they've put out since Hot Fuss and Sam's Town. I know I said that after Imploding the Mirage too but Imploding the Mirage doesn't hold a candle to this. It's almost upsetting to me that they decided to put out that album when they had this kicking around. Brandon's writing is the sharpest it's ever been, the band doesn't deliver a bad performance together at all, and most of all, those magic words, it's very consistent. I don't really know how much more I can add to here without this just turning into Brandon Flowers worship so let's just leave it at this. This album is their 3rd best ever, give it a listen, give it a spin, you probably won't be disappointed.
I would rate
Pressure Machine
by The Killers
9/10