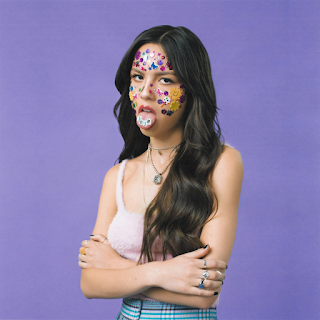 I mean, should I? Do I need to? Alright. I really didn't think I was gonna have to but fine, who cares, I'll say the line.

It's like clockwork. Every year since I've cared about music in this length, there's always one pop album that I didn't know I need that comes out of nowhere and takes me by surprise. 2018 was Janelle Monae, 2019 was Ariana Grande, last year was Dua Lipa, and yes, you guessed it, it's Olivia Rodrigo, even though this was a bit of an exception because this one didn't come of nowhere necessarily, I just enjoyed it a lot more than I expected I would.

The cycle for this album began very early in the year this January when Olivia dropped her debut single, driver's license, which is probably going to break 2 or 3 more streaming or sales records as I type this. This song just absolutely exploded upon release and actually changed the plan from Olivia releasing an EP to releasing this album. Now, what do I think of it? What's my opinion on this huge worldwide phenomenon hit? I...think it's good. I don't think it's incredible or a contender for song of the year (it's not even the best single for this album) but Olivia's writing on the song showed a lot of potential for what was to come. And with the explosion of driver's license came what everyone expected when a new pop song comes out of nowhere and takes the charts by storm: the question of her legitimacy, or in easier terms, "Is Olivia Rodrigo an industry plant." In my honest opinion, I don't doubt she's getting an industry push, she's a Disney actress after all but to be fair, we've been hearing this argument about Disney actors/actresses turned musicians forever, what ultimately matters is "Is the music good?" and the next to singles, deja vu and good 4 u made me realize that the album might exceed my expectations.

Especially good 4 u because this song is amazing. I genuinely think it's one of the best pop songs released this year. The only flaw I really have with this song is that I wish the guitars and drums hit a little harder but besides that, there's not really a whole lot wrong here. Between the production, Olivia's voice and vocal performance, the pop-punk energy of the song, it's all incredible. A lot of people have been trying to complain and say "Oh It SoUnDs JuSt LiKe MiSeRy BuSiNeSs" and to that, I say, "Yeah, that's what makes it so good." You know why Last Nite by The Strokes is so good? Because it sounds just like American Girl by Tom Petty. deja vu on the other hand is just a perfectly written song with drums that sound like they were slowed down after recording to make them sound a little sludgier and these wailing synth leads along with some cute keyboards at the beginning. I also really love what Olivia is saying lyrically looking at this ex taking the new girlfriend to go get ice cream or down to Malibu and Olivia wants to tell this girl, "You're not special, he did all this stuff for me too."
So with the whole album out now, I can definitely say that it exceeds the expectations I had however I do have some gripes. For starters, I'll just say that I'm not in Olivia's target demographic here so of course, not all of these lyrics are gonna hit me the same way they're hitting a lot of people who are listening to and loving this album. Another big issue for me is that for every pop-punk flavored or upbeat song on this album, there are a couple ballads before or after, and in my opinion, this album doesn't really flow all that well. It's not quite as consistent as I would've hoped for.

But outside of that, there's not too much more to complain about. I think brutal is a perfect tone-setter and opening song for this album and even though the guitar riff might be pretty unoriginal, I can put that aside because this is quite possibly the best opening song on any album I’ve heard this year. Olivia’s vocal performance on the song is kind of reserved and shy on the verses before she’ll explode on the chorus from anger and confusion. The lyrics on this song are hilarious but in a super honest and sometimes even smart way. Whether she’s freaking out thinking “that I’ll die before I drink” and “If someone tells me one more time / ‘Enjoy your youth!’ I’m gonna cry or asking at one point “Where’s my f*cking teenage dream.” My personal favorite line on this song is at the end of the second verse where Olivia sings, “I'm not cool, and I'm not smart / And I can't even parallel park.” There’s a sort of spacey and dreamy outro to the song that makes the transition into traitor a little easier. Lyrically, the song is about an ex who moved on a little too quickly leading Olivia to believe that this guy had some funny business going on behind her back. It’s a very bitter and biting song that I’m sure is gonna hit a lot of people hard if it’s listened to at the right time.

1 step forward, 3 steps back is a song I love just because of how effortlessly Olivia sings the word “masochistic” in the song. (#bringbigwordsbacktopopmusic) Jokes aside, I think the lyrical sentiment of the song is great with Olivia just questioning her worth, trying to figure out if she’s good enough for this guy that’s giving her mixed signals, even asking in the chorus, “Do you love me? Want me? Hate me / Boy I don’t understand.” There’s also a great line in the second verse with Olivia pretty much saying that this relationship is exciting because she never knows which lover she’s gonna get asking “Will you walk me to the door or send me home crying?” enough for you’s lyrics sort of follow the same thread, just like the title states, it’s Olivia wondering if she’s good enough for this significant other. Instrumentally this song reminds me of something either from that recent Hayley Williams album or a Jason Isbell song, mainly just from Olivia's delivery and the acoustic guitar plucking. The audio nerd in me enjoys a different guitar track being in each audio channel. happier shows Olivia starting to cope with this breakup, realizing that her ex has found someone better and that both her and the ex will move on with their life but she's still bitter about it singing in the chorus about how she hopes that her ex is happy with his new girl but not happier than he was with Olivia, she also says that he's cool to move on "but don't find no one better." While this is one of the songs that doesn't really connect with me lyrically, it's hard not to like it instrumentally with a baroque pop flair to it and Olivia just belting over the top of this. This might be her best vocal performance on the album.

The album ends on a pretty strong note kicking off with the song jealousy, jelousy which is a pretty smartly written song about the effects of social media on one's mental health with Olivia dropping lines about how all she'll see while scrolling through her phone is "girls too good to be true" and how she sees "everyone getting the things I want." I love the vocal on the song along with the sharp piano chords and hits of synth bass. favorite crime shifts back to the break-up themes, this time with Olivia sort of admitting some fault? She sings on the song about how she ignored some obvious signs and how there's "one heart broke, four hands bloody." I'm not super crazy over this song, mainly because of that weird fast sung bridge that just seems unnecessary to throw right into the middle of this song. However, the final song, hope ur ok, makes up for that little lull. It's a really sweet song with Olivia reminiscing over two old friends who she's not sure if she'll see again but she hopes they're doing well and hopes they're succeeding. The first verse tells the story of a boy who grew up with parents who were super religious and "cared more about the Bible than being good to their own child." I really love the line in this verse where Olivia sings, "Hope he took his bad deal and made a royal flush." The second verse, however, is Olivia singing about a friend who was uncomfortable with her sexuality due to a terrible support system in her life. Olivia sings:

So yeah. This was a great pop record. I'll be honest, I think the breakup themes started getting a little old by the time happier rolled around but again, I'm not Olivia's target demo here so I imagine I'm in a small minority about that. Most time's though, Olivia's writing and voice are so good that I can excuse it. And what I'm about to say is a sentiment that's been echoed a lot already so I can't claim to be the first to think this but...I'm really interested to see how this album holds up in the coming years. I can honestly see people looking back on this album in 15-20 years the same way we look back at Fearless by Taylor Swift, Tidal by Fiona Apple, or even Jagged Little Pill by Alanis Morrisette as sort of these defining pop breakup albums. I think more than anything though, this shows that Olivia has talent and she's not just some Disney actress who tried to randomly scrape together an album for more cash flow. A lot of these songs are seeming to come from an authentic place and all of these songs are honest. She has a lot of potential, and I'm super excited to see where she goes from here. My only two requests for the next album are simple, I hope she can sort of branch off from the breakup material and I hope that she starts writing more songs in the style of good 4 u or jealousy, jealousy because after a little while, the piano and acoustic guitar ballads sort of just mash together. Besides those two critiques though, all I can really say is, believe the hype.
I would rate
SOUR
by Olivia Rodrigo
8/10
SOUR is available wherever you stream your music. If you get the chance to listen to it in Apple Music's Dolby Atmos setting, do it, it's fantastic. Vinyl copies of the album are available for pre-order right now and are set to be released on August 20. There's a handful of variants available including this one from Target with an alternate cover that I plan on snagging. Links to stream on Apple Music and Spotify are below:
Posted by Andrew Watters at 2:21 AM