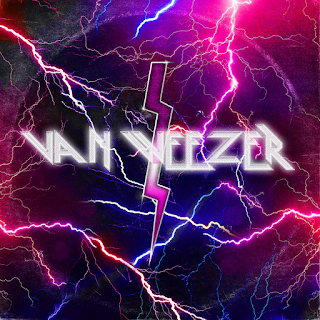 I told you guys at the end of the OK Human review that I'd see you guys in May and when I wrote that, I didn't actually think this album was gonna be out this month. But, here we are, Van Weezer is here. For those who need a little refresher, this album was originally supposed to be out this month last year, coinciding with the Hella Mega Tour with Fall Out Boy and Green Day, COVID happened, and the album got delayed indefinitely to the point where I honestly forgot about it. In January of this year, the band dropped OK Human and also announced that this album would be out in May. I know I already gave OK Human a full and positive review but I'll just say again, Weezer took a risk and it paid off big time. Van Weezer on the other hand is on the complete opposite end of the spectrum from OK Human. For starters, while there wasn't a single electric guitar on OK Human, Van Weezer picks up that slack with super chunky and thick leads all over the album. Also, Van Weezer shows Rivers being a lot less introspective lyrically, rather writing more fun and tongue-in-cheek lyrics. I don't really think either of these things matter in the long run as OK Human still felt like a Weezer album at its core, but this one feels a little less authentic in some way? I don't know, I think I just got spoiled with OK Human.
A lot of the singles get out of the way in the first half of the album, Hero, The End of The Game, and I Need Some of That. And I don't mean that in a negative way, the singles are all great. Hero shows Rivers singing about these larger-than-life fantasies he had as a kid, saying he wanted to swing from webs and chase down bad guys, but as he grew older he realized that these things were impossible and he started realizing that the world was mean and life isn't all sunshine and rainbows. Then there's I Need Some of That which the band dedicated to the late Ric Ocasek who produced a handful of their records and was generally just an important figure in Weezer's career. The guitars in the intro are grand, blazing, and they really kick off the song well. Rivers sings on the song about how playing guitar and listening to Rock music changed his life and opened his eyes to a whole new world. He sings about how "plugging into a Marshall stack" made him feel like he could be anything he wanted to be. I also love that line in the chorus where he sings "Even if we blow up / We're never gonna grow up!" It's not like that sentiment is new to Weezer at all but it always just puts a smile on my face. And my favorite of the three and probably my favorite song on this album is The End of The Game which kind of sucks because it's the oldest song of all of these.

The song kicks off with some Eddie Van Halen-type tapping and some gigantic chords that make the song go off like a bomb. The riff might be a little bland but who cares, this thing slaps. There's also an awesome breakdown around 2 minutes in that leads to more tapping and another super grand chorus. It's the closest we get to a Blue Album song on here. It's classic Weezer through and through. But after this point in the album there aren't too many more highlights. The song All The Good Ones isn't bad. It's more mid-tempo (think Beverly Hills) and the lyrics on this song are pretty cheesy but I don't hold Rivers to the same lyrical standard as I do some of his contemporaries like Tyler Joseph or Brandon Flowers. There are lyrics about how "Rock n' Roll sounds better in the car" and how Rivers loves seeing her play guitar and dive "down on the whammy bar." The chorus is catchy though and the guitar leads on this song are great so I can put some of that cheesiness aside. Then Beginning of the End closes out the first half of the album with the beginning of the song being just Rivers and his guitar then at a minute in, the rest of the band kicks in. I didn't know this until I did this review but this song was written for that Bill and Ted: Face The Music movie so the lyrics tie into the same themes as that, a world where the life of rock and roll is threatened. The second verse does that the best with Rivers saying "Nostradamus predicted a bomb would drop / And all our guitars will be hung in an old pawn shop." And honestly, the guitar work on here gives me a lot of Nirvana or Smashing Pumpkins vibes just with how it goes from being super soft and shy to extreme distortion with a super simple riff too.
But after this point, this album just falls apart at the seams starting with the song Blue Dream which just blatantly rips off Crazy Train by Ozzy Osbourne. Yes, I know technically a rip off because Ozzy got a writing credit and they credited him with interpolation but still, they don't even try to rip it off in a creative way. It's like they were shopping for riffs at a store and Rivers was like, "Oh hey, Crazy Train is on sale let's buy that." The lyrics on the song don't really help its case either with Rivers singing about going to the beach and swimming in the ocean? There are actual lyrics here where Rivers sings, "The octopus says hi / I say, "How do you do?" / He's quite the gentleman" which sounds absolutely hilarious over this chugging guitar riff. Lyrically, this album continues to suffer on the next song, 1 More Hit, and this one hurts more because I understand what Rivers was going for. It's a song that's supposed to be about a drug addict who's indulging one last time before they quit cold turkey but it's so terribly written that it's funny. Especially the line that's been memed to death already "Pump it into me / Please, Daddy." There has to have been a better way to have written that line.

Sheila Can Do It and She Needs Me are both pretty forgettable songs. There's nothing too terribly bad or good about either of these songs to make them stand out on this tracklist. Although I will say, I do think She Needs Me is a nice burst of life at the end of this album with the speedy, toe-tapping guitars and catchy hook in the chorus. Precious Metal Girl closes out the album acoustically and while I do think that's River's lyrics here are pretty sweet and sort of tongue in cheek, it's not really enough to save this album at its last moments. I do want to point out that one line in the chorus that always cracks me up though where Rivers sings that this girl looks like she "could've been in Faster Pussycat" which is just so random that I can't help but laugh at it.
So is Van Weezer better than OK Human? Does this album with Weezer going back to the basics turn out their strongest album in recent memory? Are this album and OK Human gonna be #1 and #2 on my AOTY list? Well, the answer to all of these questions is no. I think what kills this album is just how inconsistent it is. It starts off really great and really strong and then just falls off of a cliff in the last half. It also hurts to know that both of my favorite songs on here were already out as singles waaaaaaay before we got this album. I don't know, I was gonna say it might be a result of the band overworking themselves but meanwhile, they're planning on dropping 4 albums in 2022, and I'm curious to see what they pull off. In the meantime, this album isn't terrible, but if you didn't like any of the singles, I doubt you'll enjoy sitting through it.
I WOULD RATE
Van Weezer
by Weezer
5/10
Links to stream the album on Spotify and Apple Music are below. Vinyl and CD copies are available on Weezer's webstore. There is also a limited edition Neon Magenta Colored vinyl exclusive to independent record stores.
Posted by Andrew Watters at 9:00 AM