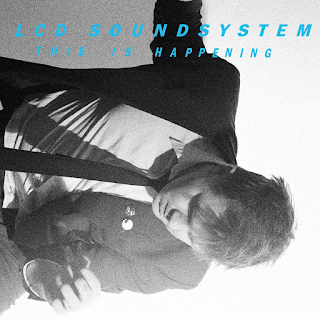 Welcome to the first album review of 2021. While this might not be a formal album review, it's still gonna get my creative juices flowing. I honestly wanted to put this on the backburner for a little while after all of the Year-End Lists but I have a little time right now and friends preferred me doing this to reviewing Morgan Wallen's latest album Dangerous which, trust me, you don't want to hear my thoughts on that.

For those of you who came from Reddit, you probably already know about this band and this album, but I know that likely, close to none of my friends who read this will know about either, so here's a little crash course on these guys. Hailing from Brooklyn, New York, LCD Soundsystem is the brainchild of James Murphy, the man you see on the cover. He started off as a DJ in New York's club scene and was a big hit with the way he would fuze pop and rock tracks together. Another fact that I learned about him while trying to do some background research was that at age 22, he was actually offered a job to write on Seinfeld but turned it down to pursue music (the show was just getting off the ground at the time). Sometime around 2001, Murphy started to realize that more and more DJs around the city were picking up on his influence and even playing his mixes at parties. So, at age 32, James Murphy formed LCD Soundsystem and dropped the band's first single Losing My Edge in July 2002. It's a song with this filthy disco beat that later transforms into some sharp drumming and a synthpop explosion. Murphy's lyrics on the song are hilarious, he's pretty much singing from the view of a gatekeeper even though he's just anxious that time might pass him over. He sings about being the first person to play "Daft Punk to the rock kids" or listing all of the records he obsesses over, listing off almost 50 artists after this person he's talking to has pretty much one-upped him. Almost like when you're a little kid and you're bragging and you go, "OH YEAH!? Well I have this or that!"

The band would release three more singles before releasing their self-titled debut album in 2005 and while I'm not crazy over it, there are still some great songs on there, namely the album's biggest single and opening song, Daft Punk Is Playing at My House. Once again, there are some hilarious lyrics on the song mixed with a great beat fusing disco and punk music. I love the lines about how he bought 17 cases of beer for the party and "all of the furniture is in the garage." I also love the line about how the jocks start fighting the doormen because they can't get in. That's a thing I love about Murphy, he's not exactly the best singer in the world and you can tell he has trouble hitting some notes sometimes but his lyrics are always super relatable and he just seems like a cool guy. Someone you'd invite over to the family BBQ or that one Uncle you can't wait to see every holiday.

2 years later we got Sound of Silver. Speaking on the recording of the album, Murphy felt that the self-titled album sounded too "woody" so to try and overcome that, he rented the same studio but covered all of the walls in tinfoil and silver fabric, hence the name. And to be honest, I almost chose that album to do for this as I think it is the band's album but this album we're here to talk about is my favorite of their albums and the one I think you should listen to first if you want to get into this band. Sound of Silver featured some sharper songwriting, tighter grooves, and the energy of the album doesn't die down at any point and the one-two punch of the songs Someone Great and All My Friends might be one of Murphy's greatest achievements with this band.