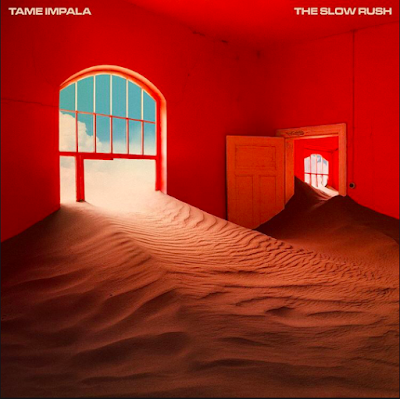 This is might be the most anticipated release in indie music this year. The fourth full-length album from Kevin Parker's psychedelic pop-rock project, Tame Impala. Everything he's released up to this point has been brilliant. His first full album, Innerspeaker is a brilliant psych-rock album. From the phased out guitar licks in It Is Not Meant To Be and Solitude is Bliss to songs like Why Won't You Make Up Your Mind which sounds like something that would've been on a Cream album. His next album, Lonerism, was even better. Songs like Endors Toi and Apocalypse Dreams are perfect blends of synth and guitar. Feels Like We Only Go Backwards is sad music for those days when you feel worthless, and Elephant is a straight-up stadium jam with loud guitars, thumping bass, and synths going crazy during the instrumental bit. Currents, released in 2015, was a complete departure from those sounds, with Kevin going full on psych-pop. And that's not to say it's bad, it's really good. The opening song Let it Happen is an 8 minute long disco-flavored track with an amazing, pitched down guitar solo on the back end of it. Yes, I'm Changing is another sad song for sad days but this song has more hopeful lyrics, and, do I even need to talk about The Less I Know The Better??


So with all this in mind, I was interested to see what else Kevin had up his sleeve. The singles were a mixed bag but in a good way. The original version of Borderline is a groovy, bass-heavy song that has a nice drum beat and a catchy chorus. 6 months later after extensive summer touring, we got the next single It Might Be Time which is completely different. The verses are kind of soft but then the chorus explodes into these loud, blown-out drums, heavy bass, and sirens wailing with a Supertramp flavor to them. The next single, Posthumous Forgiveness, took a little while to grow on me. The lyrics on the song are super sad with Kevin talking about his father who he never had a great relationship with, telling Zane Lowe that the first half of the song sounds like "confused rage" while the second half of the song is "the sunshine after the rain." The final single, Lost in Yesterday, has the same groove as The Moment from Currents. Almost like something from an early Michael Jackson album. It's funky as hell and Kevin's performance on the song is amazing. The chorus is highlighted by some organs in the background and this awesome synth-guitar lick in between the chorus and verse. So with all this in mind, I had high hopes for this album. Yet somehow, all my expectations were exceeded.


The album starts with an interesting opener called One More Year. It's a headache to listen since there's so much going on at one time, but that doesn't take away from the quality of it. There's a choir chanting the title while Kevin does a spoken word over the song. There's too much going on to talk about here. The next track, Instant Destiny, is the start of the greatness. Once that song gets going, the album never looks back. The song is about Kevin's decision to propose to his now-wife, Sophie Lawrence. The instrumental is great. The drums are straightforward but they work, there are some arpeggiated synths in the second verse and latter half of the song that fit beautifully into place before the song gives way into an outro of horns. The new version of Borderline is an improvement. The bass is louder, some of the unnecessary bits are removed, and the song is fitted with a new vocal take and some new lyrics too. I do prefer this version to the original one. Breathe Deeper might be the best song on the album. The intro has some twinkling pianos and a great bassline, almost like the one in his collaboration with Mark Ronson, Daffodils. The bits in between the first verse and chorus are beautiful. A drum fill gives way into a loud piano riff, synth bass, and waves of phaser each time the cymbal hits. The lyrics show Kevin talking about the importance of deep breaths, and how much they can help in stressful situations with the chorus going,

"Would you say seems you're coming on?
Breathe a little deeper
Should you need to come undone
And let those colours run
Would you say now you're having fun?
So do this and get through this
And come find me when you're done
So we can be as one"

The song transitions into something straight out of a disco around the 3-minute mark, with a little more harsh bass and the same piano pounding away in the background. Around the 4:30 mark, the track pauses and gives way to an amazing two-part outro. The first part has the same vibes as the song Disciples where everything is kinda muddy but the song keeps going. The second part is even better with some Daft Punk like synths, another great drum loop, and some acoustic guitars to end it.

Tomorrow's Dust is a song I've been waiting for since Kevin originally posted the teaser for this album. The lyrics speak of the motif of this album, time. With Kevin saying in the chorus, "in the air of today is tomorrow's dust." The best part of this song comes around the 4:15 mark where everything drops off and a wall of strings comes in with acoustic guitars strumming away and even some congas in the background. On Track is Kevin's attempt at a November Rain type power ballad. The instrumental in the verses is pretty bare besides piano, some synths, and Kevin's voice. Before the chorus, there are some organs before cymbals soaked in phaser come in. However, after the chorus the instrumental just keeps on building and building throughout the song. Is It True? is a song Kevin made in hastily just to see what would happen, and the result is pretty great. It's upbeat and super fun. The bass line is sick and the synth guitar solo is the icing on the cake for this song.

Glimmer is another fun upbeat track that merely serves as an interlude, but it's still not half bad. It's dripping in Daft Punk influence which might be why I like it so much. One More Hour, the last song on the album, might be the best closer Kevin has written thus far. The lyrics see Kevin pondering back on how he got to this moment, telling Zane Lowe, "The start of the album was setting out a year, and then like, “One More Hour” was gonna be the last hour of that year, you know like where have we come to?" The song is a wave of build-up, crescendo, build-up, crescendo with just piano and Kevin in the verses but huge crashes of guitar, drums, and phaser during the chorus. The song ends with the sound of screaming guitar feedback alongside some strings in the background and drums before the song fades out. The last words of the album show Kevin getting very open about his own self-doubt, saying, "All your voices said you wouldn't last a minute there."

While this album isn't the best this Kevin has ever written, it's his best effort making a psychedelic-pop album thus far. And I think what I enjoy most about it is, he feels free again, almost like on Lonerism where he felt bold and brave and just wanted to have fun making music. This style of music really suits Kevin well and I'm excited to see how these songs play out live, and even more excited to see what he creates next.

The Slow Rush
By Tame Impala