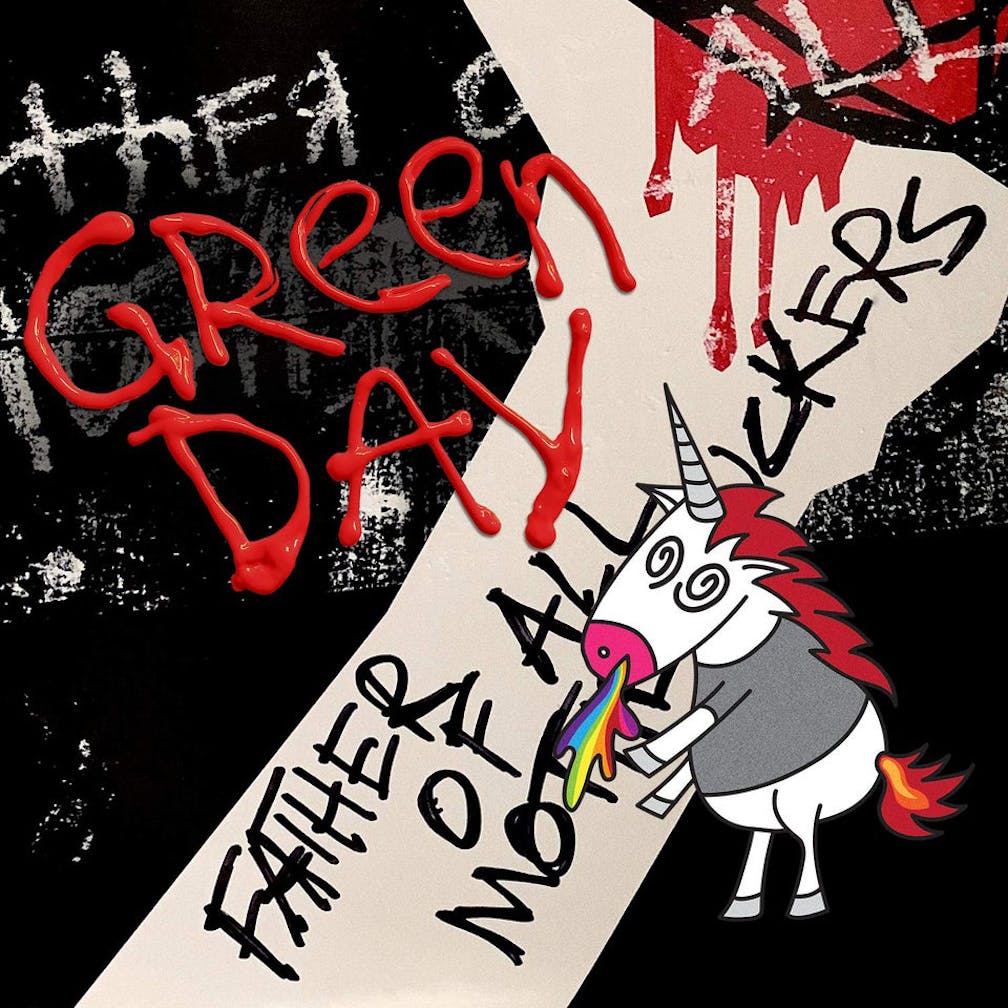 First new album review of the year and decade, and I couldn't think of a better band to kick us off. Green Day has been one of my favorite rock bands for the past 5-6 years and they never manage to disappoint. Though I wasn't a huge fan of the Trilogy or their last album, Revolution Radio, each managed a few decent songs per project so I wasn't too upset. When the first single and title track, Father of All... was released, I was kind of indifferent because it didn't sound like Green Day, especially Billie's voice, but as time went on, I found myself liking it. The heavy guitar riff, the energy of the song, it's not a bad rock song. The next single, Fire, Ready, Aim was almost the same formula. Heavy riff, catchy chorus, Tre Cool pounding away on the drums in the background. But then, I admittedly forgot about the project. Another single, Oh Yeah! was released but I didn't see the news flash for it. However, come Friday morning, I was excited to see what the boys had up their sleeves. I was not disappointed.


Coming through with their shortest album since their seminal album Dookie (this album only clocks in at 26 minutes), there is no room for filler here. Every song on the project is riff heavy and tries to channel that energy they had on earlier projects. Luckily, the three teaser tracks are the first three songs on the album but they do a good job of setting the tone. Two energetic songs, then something a little groovier but still energetic. Meet Me on the Roof is the first fresh track on the album. It's a dance number that has a little 50s flair to it. It reminds me of Queens of the Stone Age's The Way You Used To Do with the riff and the all-around vibe of the song. I Was a Teenage Teenager is the best title on the album without a doubt. Talking about the song, Billie Joe Armstrong says, "I wanted to write a song about what it is like to grow up as an ordinary guy. There are so many extreme teenagers in art, whether werewolves, anarchists, or vampires. Almost all of them are really stupid boys and girls out there, many of them so little on the looser-side." Instrumentally, the song is great. The verses are pretty bare besides Billie and some guitar in the background, then the chorus hits and it's even better. Drums and loud, crunchy guitars hit at the same time making for a great explosion of noise.

Stab You in the Heart and Sugar Youth are both fast-paced punk rock ragers. Stab You in the Heart has an awesome guitar riff and an even better solo right in the middle of it. Sugar Youth sounds like Basket Case and American Idiot had a baby and that baby hit a line of speed straight out of the womb. It's also the second shortest song on the album clocking in at less than two minutes. It's another song about being an ordinary teenager, except this time our ordinary teenager is at a party he doesn't want to be at. Junkies on a High is the Boulevard of Broken Dreams of this album. It's also, in my opinion, the best song on the album. It's a slow, mellow song about the singer getting high while the world burns down around him. The lyrics are actually pretty introspective at times as if this is the only song they really put time into writing. Like in the second verse, Billie says, "Rock n roll tragedy, the next one could be me" referencing all the friends and influences he's lost in this business, also adding quickly after that line, "Heaven is my rival." The last two songs are kinda...odd. Take The Money and Crawl is a song about god knows what. Even Genius lyrics says the song is about a mess. It also has the funniest lyric on the album with the line:

Graffitia is a nice closer. Nothing huge or grand to make it seem like the last song, it just sorta ends with Graffitia. I guess that's a good way to summarize this album too. There's nothing grand or unique about it to set it apart. While Revolution Radio had some pretty high highs but pretty low lows, this album is consistently okay the whole way through. And that's not to say it's bad, this album falls under the same category as the new albums The Black Keys and The Raconteurs released last year. They're not groundbreaking projects, but they have amazing replay value. With that being said.

I would rate
Father of All...
By Green Day