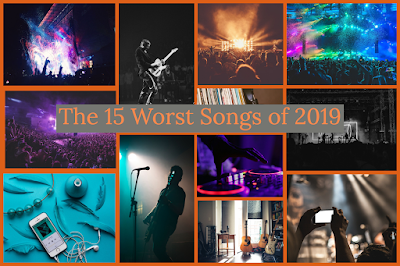 I honestly hate that I have to make this list. A lot of the songs on this list are from artists I really like and I hate to put them on here. But enough of the sympathy, let's get going on 15 of the worst songs I heard this year.


Celebrity cameos, slick production, this song should be amazing on paper. However, it falls so short of that. Sorry attempts at humor, terrible bars. It's sad that a song with such great intentions had to be so bad.


I understand the premise of this. Chance is getting married, it's his big day, and all he wants to do is dance and go crazy. However, it would help if Chance could actually do a good job of conveying that idea rather than barely mumbling over the song before having Francis and the Lights scare the living daylight out of me. This song honestly sounds like an episode of the Eric Andre Show.

If I had a dollar for every time I had to listen to this song, I would take that money and move to an island where I would never have to listen to this song, specifically, this remix again. It's such a weird concept. A country song, over a trap beat, that samples Nine Inch Nails, and features the man who sings "Achy Breaky Heart." It's not that it's actually bad, the beat is okay and the vocal performances are great, but god damn it this song is so annoying. It sucks that this is the song that made Lil Nas X popular because he's gonna be living in the shadow of this song for the rest of his life.


Jesus Is King is one of the most peculiar albums I've listened to this year because it's produced a few of my favorite Kanye songs but also has some head-scratchers, including this one. The second you hear the opening line, "Closed on Sunday/You're my Chick-fil-A," you know that this song shouldn't be taken seriously. I know that this is supposed to be a Christian album, but this song is such a cheesy attempt to push family values. When I first listened to this album, I didn't think it could get worse, however, it could. More on that later.


There is no better description of a butt-rock song than this. Generic riff, pointless lyrics, odd delivery. Mark Hoppus has this problem of writing about high school problems even though he's 30+ years removed from those times and he hasn't shaken this habit. It's just a constant rinse and repeat cycle that, honestly, is kinda boring now. Also, I don't know how Mark's voice can still sound more and more soulless, he's literally singing for a paycheck at this point.

I've always been a fan of Shawn Mendes but this song does absolutely nothing for me. I honestly think that it's the laziest thing Shawn has put out in his career. I thought this track was good when I first heard it. It was catchy and easy to sing along to. But every time after, it just got more and more frustrating as it seems like he only sings the same thing for three minutes while the beat speeds up and slows down.

Of all the songs on this album, this one might be the most confusing. First, Ed Sheeran trying to rap on this song is downright cringey. I could've gone my whole life without hearing him attempt to rap yet, it exists. Also, Travis's verse serves absolutely no purpose. He literally just jumbled some words together so he could get his check. There is absolutely 0 chemistry between these two.

I wish I had the words to describe the sound of this song. It honestly sounds like something that would play in an arcade game. But not a good arcade game, like an arcade game that's tucked away in the corner that no one plays. The lyrics also don't do it any favors. From name dropping Cheif Keef to blaming the IRS for charging crazy prices for merch so he can feed his family. This song is all over the place and not in a good way.

I honestly don't even know where to start with this one. For how short it is, this song should not be as annoying as it is. With well thought out bars like, "Hoes poppin' sh*t like they hot but they not (No)" and "Ridin' that d*ck like I'm Cardi Andretti," you can tell that she really thought this through. I honestly cannot wait for this album to come out because I haven't properly dragged an album in a while.

If I wanted to be called poor for 2 and a half minutes by a rapper, Post Malone is the last guy I want to do it. This song is the definition of flexing, including lines like, "Versace boxers on my d*ck / Bud Light runnin' through my piss." It's easy to imagine that this song was the one his sponsors put him up to. Also, this song honestly sounds like a ripoff of one of his own songs, Too Young.

There are few rappers who sound good over minimalist bass and drum beat, and Chance isn't one of them. This song somehow manages to be the best and worst song on this album at the same time, because while it is bouncy and will go down well live (if Chance ever does shows for this album) but Chance's voice makes me wanna throw my phone into my pool. DaBaby is the only person on this song with a decent performance because he is one of those rappers that sounds good on this type of beat.

This is the type of song that makes you wonder, "Just how long were Josh Homme and Co. in that desert for?" The song features Josh  Töôrnst Hülpft singing one of the strangest songs I've ever heard. It starts with our singing talking about how he drank glue then goes on to explain, you know what, to be honest, I don't even know what he's explaining. This song is a hilarious mess.

Have you ever wanted to hear a rapper fight a beat? This is your song. Blueface is so off-tempo that it's not even funny. He has so much he wants to say but doesn't have enough time to say it. The beat sounds like something I would put together in the GarageBand iPad app when I'm bored. You know what, I bet I could put together a better one, just being frank.

This song sounds like someone threw a cat in a blender and added distortion and auto-tune to it. I seriously have no clue what I'm listening to. The lyrics are merely there because they have to be. Singer Laura Les starts off the song pretty much bullying a person who she believes herself to be better than. I really considered putting this song in the number 1 spot, but there's still something worse than this somehow.

Earl Sweatshirt has always been a pretty experimental rapper, but that's a terrible excuse for this song to exist. The beat on this song is absolutely awful. It honestly sounds like something a pirate would play on his hunt for gold. It just keeps looping over and over and over to the point where jumping out of my car seems preferable to hearing it loop over again. Also, it was very experimental of Earl to sing this song with the mic inside of his mouth. Very cool Earl.

Posted by Andrew Watters at 8:45 PM