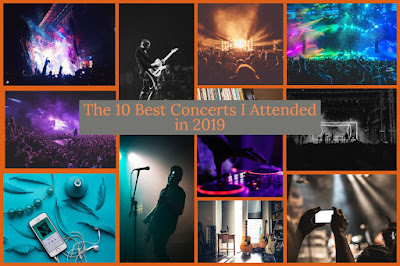 Thank god, we're finally done with all the bad stuff. I'm tired of trashing albums and songs, it's time I start talking positively. Here now is the list of the best concerts I went to this past year. This list is gonna be a little bit different than the worst concerts list since, for this list, I'm only including shows I saw in full, from start to finish. So while I'd love to talk about how incredible The Cure's encore at ACL was, or how the end of Los Lonely Boys set at KAABOO Texas melted my face, I don't think it's completely fair. So without further ado, here is the list. 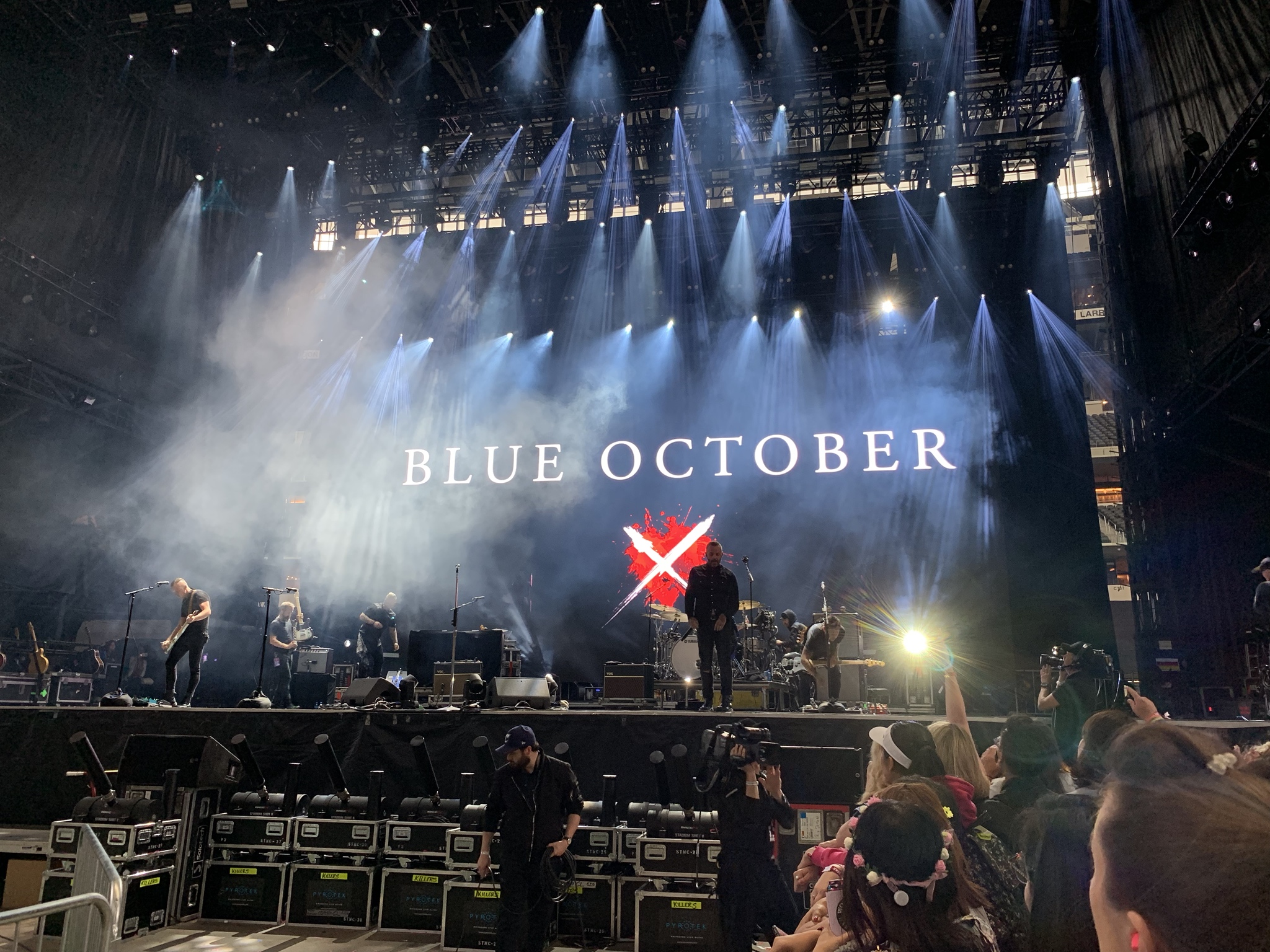 Houston based rock band Blue October is a band I've been familiar with for a little while so I kinda knew what to expect that Friday night. However, lead singer Justin Furstenfield completely stole the show. Gliding across the stage and even stopping at times to bust a move while still hitting every note flawlessly. The band was super tight and the crowd had great energy which made this show very enjoyable.

Favorite Moments: Singing Into the Ocean with a couple thousand strangers; my dad saying Justin reminded him of Adam Levine 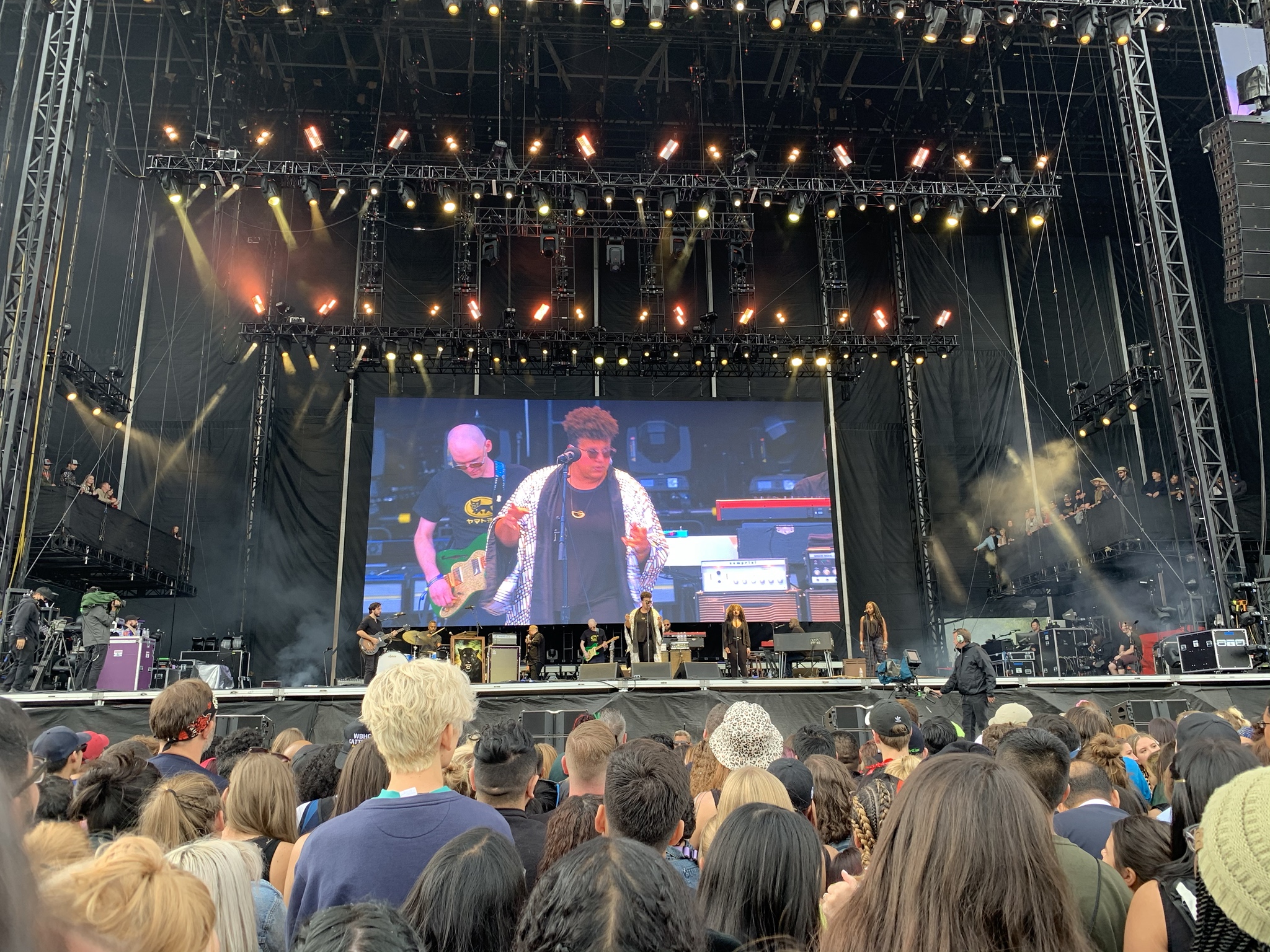 I had never listened to Alabama Shakes before but the hype surrounding Brittany (and my friends wanting to camp for Billie) made me check out her set. I was blown away by just how talented she was and how amazing her voice was. Her performance of Stay High could possibly be the most peaceful moment of my life. Even though half of the crowd at that point couldn't have cared less who was on stage, she did a good job of keeping everybody engaged and making sure everyone there was having a good time.

Favorite Moment: Brittany walking out and acknowledging us by saying, "Gah damn, there's a lot of y'all out there, I like that. Y'all ready to get charged up!" 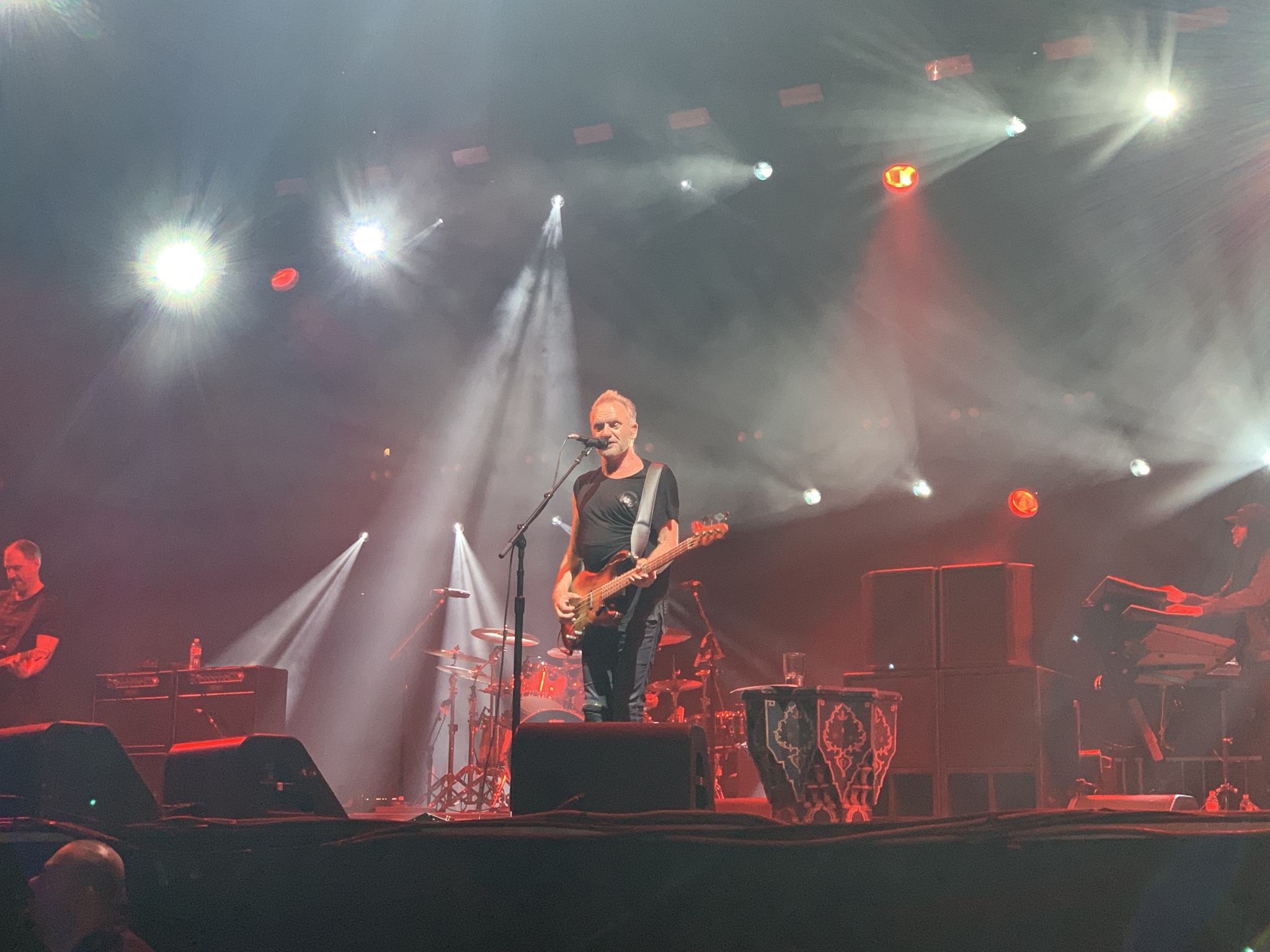 There is no show I would've rather had barricade for this year than Sting. He quite possibly had the softest intro of any artist at the entire festival. Promptly walking on stage at 9:30 PM, waving, then launching right into Message in a Bottle. The show was a trip through his entire career, including hits from The Police, sing-a-longs from his solo career, and even a song from his collaboration album with Shaggy. His performance of Roxanne nearly blew the roof off of the stadium. A short two hours after he walked out, he gave his tech the guitar he was playing, blew the crowd a kiss, and promptly walked off stage.

Favorite Moment: This festival had a VIP package that put you in a special pit right in front of the stage. During Fields of Gold, a couple walked out of the pit and took a selfie right in front of Sting to which he responded, "What the f*ck?"

Saturday of W2 did not start off well for ACL. There was already bitterness throughout the park as Megan Thee Stallion didn't show up for her set and Denzel himself was 10 minutes late. But the second he took the stage, all was forgiven. For 50 minutes, he sprinted across the stage, nailing every bar, and prompting us to mosh and jump only by his energy. And when he did prompt us to open up a circle for his last song, Ultimate. Well, just watch this. When he realized he was out of time he hopped into the crowd to proclaim, "I am out this mothaf*cka."

Favorite Moments: Denzel and his DJ giving each other hell throughout the set; Helping a blow-up doll crowdsurf; Having my dad text me after saying, "Did you survive?" after he watched the opening songs from behind the sound booth. 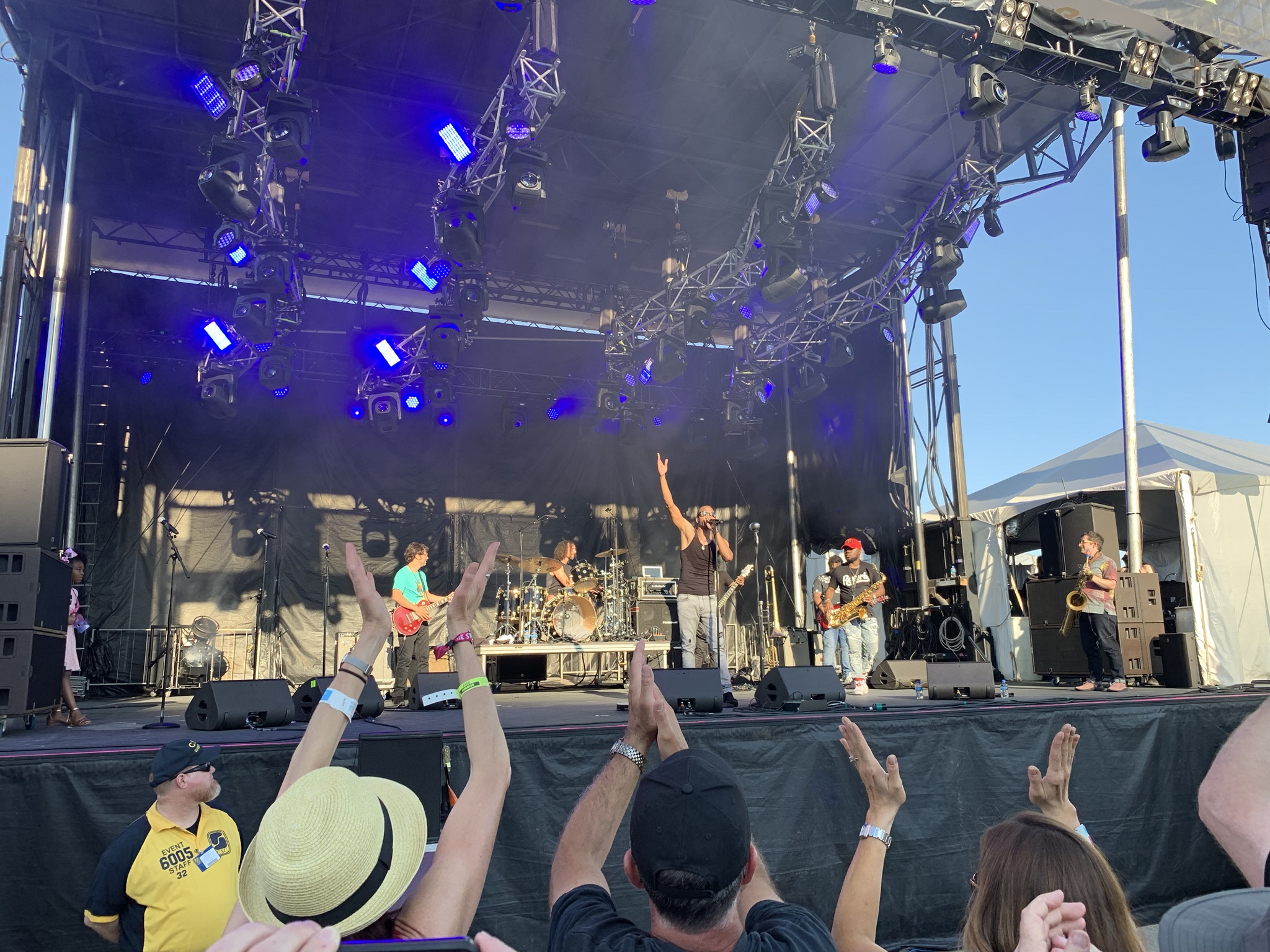 I don't think there is a better example of pure talent than Trombone Shorty. He and his band were without a doubt the most talented individuals at the entire festival. For 45 minutes straight, the band sounded like they were just jamming. The set sounded like I was walking down Bourbon St. at 1 AM looking for beads. The set ended with the band covering Brain Stew by Green Day which might be one of the best performances I've heard all year. What I loved about this show was that it all music, unlike the other nights. No lasers, no confetti, just raw talent on stage.

Favorite Moment: One of the background singers daughters sitting backstage playing on her mom's phone, taking pictures and videos and every so often, coming on stage to take a picture with her mom. 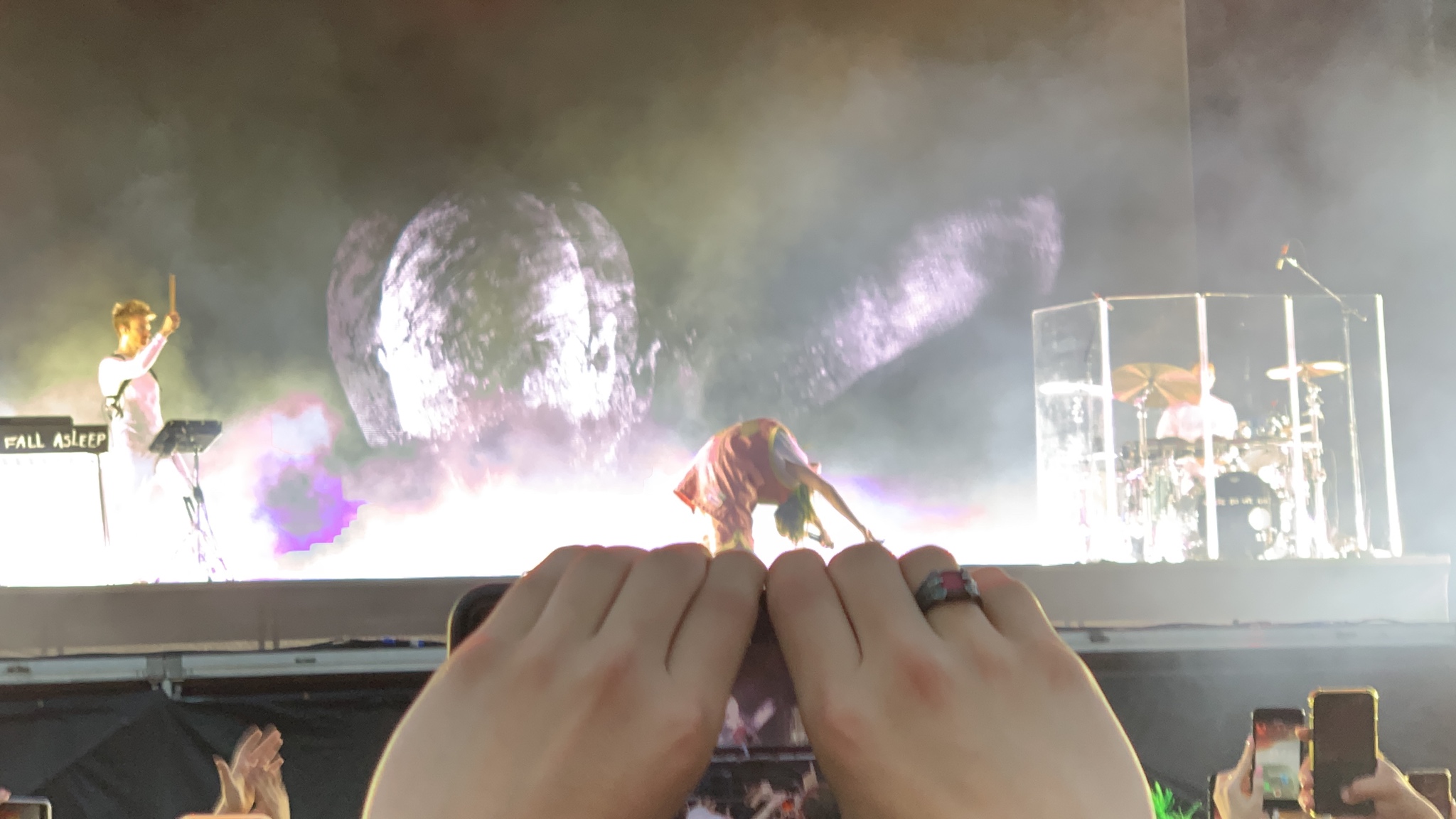 As soon as Brittany Howard's set concluded, you could feel the draw Billie had. The show started with an eerie, anime intro which led to Finneas and Drew Marshall hopping on stage, then Billie strutting to her place atop a riser. The show started with her smash-hit bad guy which sent the entire park into a frenzy. The rest of the show was an hour-long scream-a-long with Billie having everyone in the audience in the palm of her hand. There was a lot of skepticism when ACL announced her billed so highly on the lineup, but anyone who was there (which, was a lot of people) would tell you that she deserved her spot.

Favorite Moments: Billie calling out the VIP section for not bending down during COPYCAT; Her giving a speech about being present in the moment because we'll never have these moments again before when the party's over. 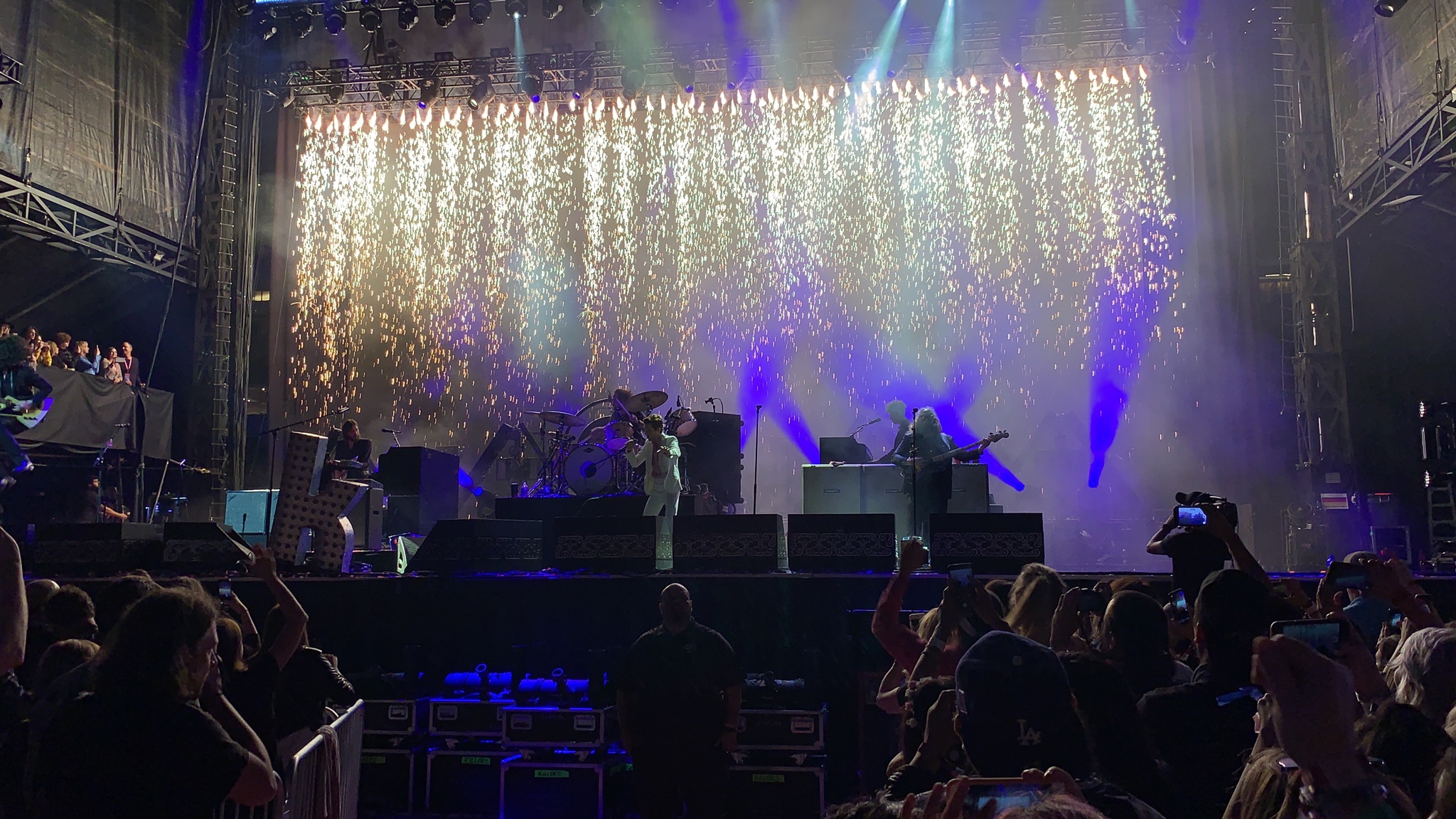 If you're a legendary rock band, one of the most ballsy things you can do at your shows is come out and play your biggest hit first. At KAABOO Texas, The Killers did exactly that. As the horns of Frank Sinatra's Luck Be A Lady blared through the PA, Brandon Flowers walked onto the stage, put his hands around his hips, and guitarist Ted Sablay played the opening notes to Mr. Brightside. The show had that Las Vegas flair to it, tons of confetti, flying sparks, and plenty of lasers to go around to complement the fantastic band. Flowers is a true showman. He was enthusiastic, passionate, and I don't think he stopped smiling the whole time. The band spent an hour and a half ripping through hit after hit after hit and the crowd ate it up.  "We're The Killers and we're brought to you by way of Fabulous Las Vegas, Nevada," Flowers said as the final notes of When You Were Young rang out and the band walked off stage.

Favorite Moments: Before Runaways, Flowers and Sablay covered Amarillo by Morning to the Texas crowds delight; Before For Reasons Unkown, Flowers and drummer Ronnie Vannucci Jr. pulled an audience member from the crowd to play drums on the song.

Even though The Killers headlined KAABOO Texas that evening, it was Alanis Morissette who stole the evening. She came on stage, very pregnant, and launched straight into You Learn. The rest of her set, which relied heavily on her 1995 album Jagged Little Pill, was a trip back to high school for most of the attendees. Everyone next to, in front of, and behind me was singing their hearts out, which is part of what made the show so fun. I had never experienced anything like that before. The band behind her was incredible. They had the perfect balance between talent and energy. As for Alanis, it's like her voice has never aged. She hit every note with same amount of emotion as she did when she recorded it. Although I would never go out of my way to see her again, she should be a "must-see" for any 90s rock fan. 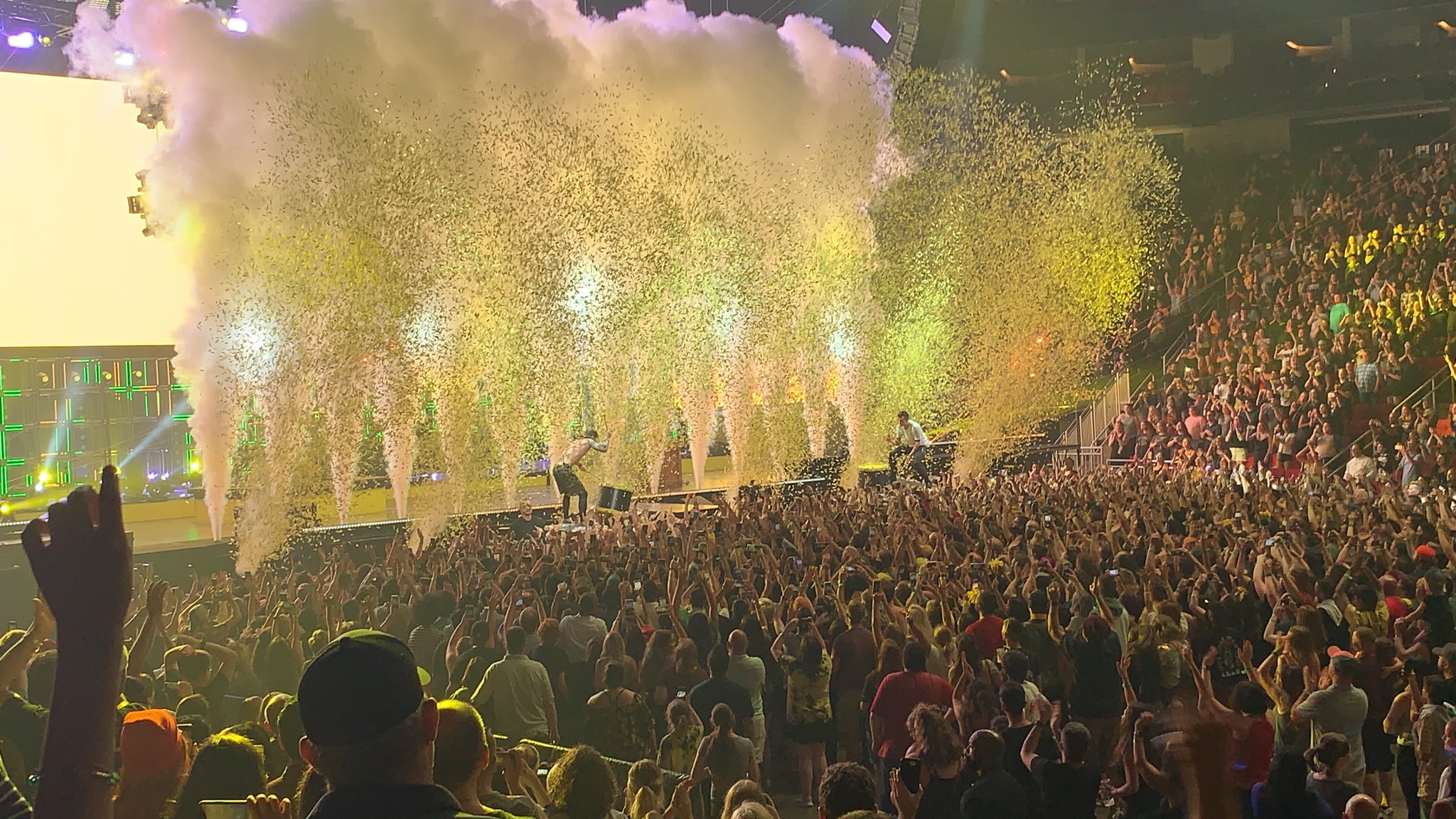 Driving down the street to the arena, it was easy to see the effect that Tyler and Josh had on the city. Members of the Clique lined the street, decked out in neon yellow and camo, waiting for the doors to open. The show started off kind of spooky. A curtain dropped revealing Dun, clad in olive green and holding a torch, and Joseph, perched atop a burning car. For the next two hours, they proved that they are a live force not to be reckoned with. The show featured Joseph and Dun singing and drumming (respectively) on top of the pit and Joseph falling through a hole in the stage and popping up three rows behind me. The thing that made this show even more incredible was that Tyler and Josh had more energy between both of them than most other 5 or 6 piece bands I've seen. It doesn't matter how much you can't stand them, or how sick you are of Heathens. If these two are ever in your city, go see them.

Favorite Moments: Their performance of Car Radio, the song that made me a fan of this band. It was complemented with cryo, lasers, and Tyler running to the back of the arena and climbing to the top of a platform to finish the song; Tyler's speech before Trees was also a highlight of the night. 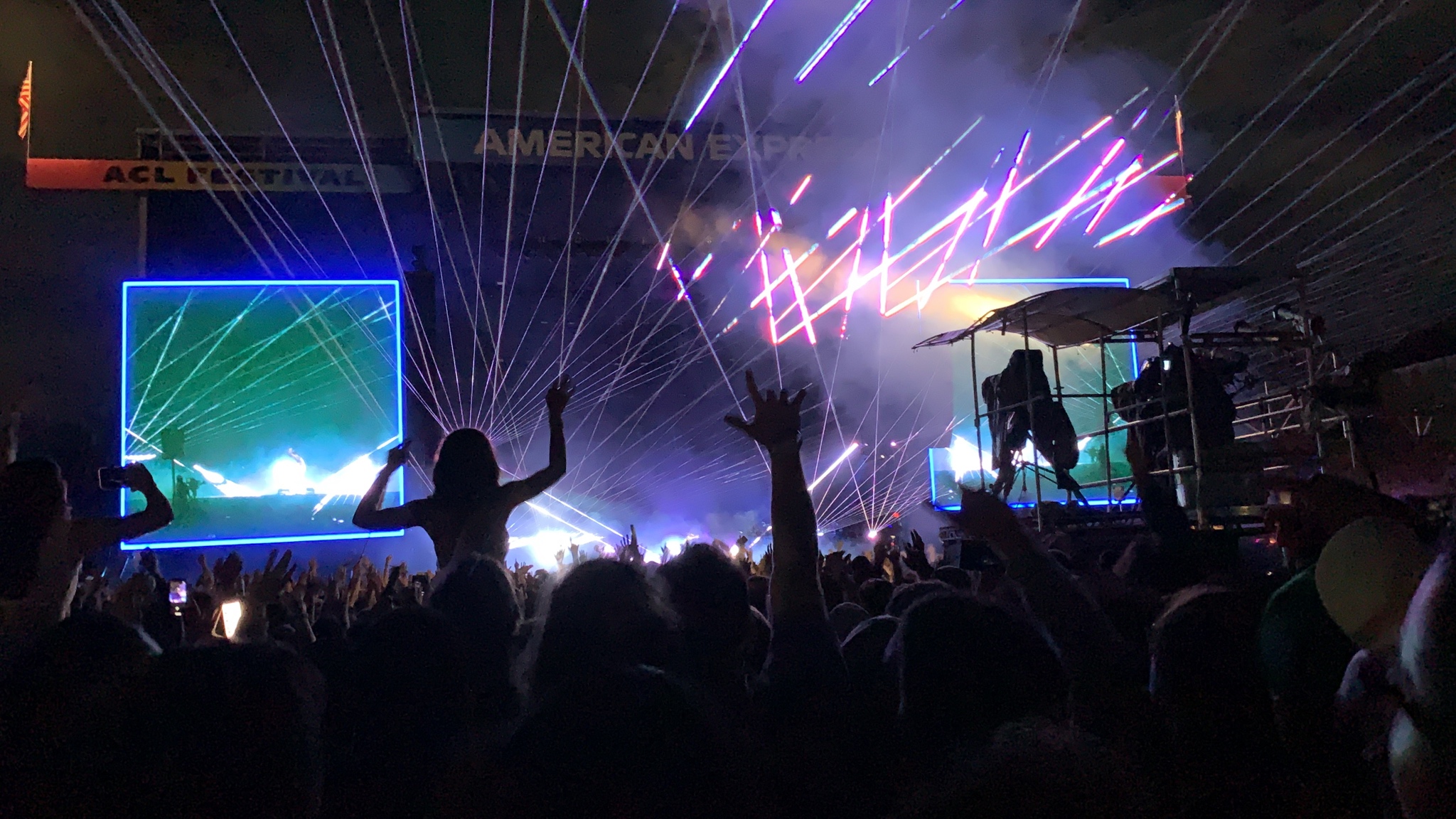 When I got the news last September that Donald Glover had broken his foot and would have to cancel his ACL appearance, I was gutted. However, after he finished performing the still to be released Algorythm, I realized that it was for the best. A festival run across the country helped him hone in this beautiful beast of a show he put together. The show started with Glover standing on a platform in front of the sound booth surrounded with disco balls which lifted him high into the air. The show kicked off with him performing the Algorythm song I mentioned earlier, an epic, 7 minute long track which featured a choir chanting behind him as his band tore it up. Glover spent just as much time in the audience as he did on stage, and when he was on stage, he was hitting dance moves that were smoother than butter. Spinning around, shuffling, even moonwalking at times. The show is really split into three sections. The intro, which consisted of some of his more upbeat songs like Summertime Magic, Worldstar, and Me and Your Mama, the latter of which featured a fireworks behind the stage. The trippy songs, including Riot, with a slow intro bursting into a loud wall of sound with Glover running back and forth across the stage, Terrified, and another unreleased song, Human Sacrifice. And finally, the hits, which might have been the best part of the show. As he finished Redbone, he ran back into the crowd one more time, standing on top of the barricade and even running through the VIP section, before getting back on stage and simply saying, "Thank you Austin," and disappearing.

Favorite Moments: Donald's interactions with the crowd; the live band; all of the lasers, especially during Sober, which might be the best live performance of any song I've ever seen.
Posted by Andrew Watters at 10:25 PM